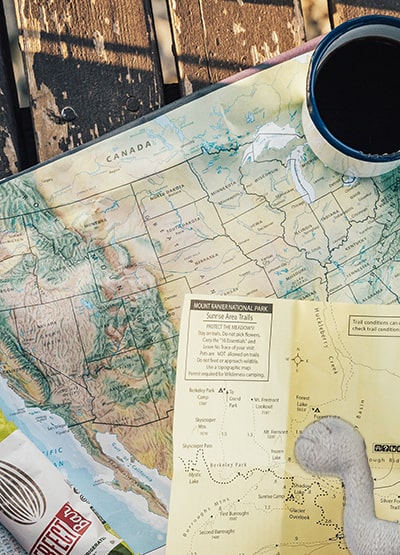 June is here and I’m ready to get outside and enjoy this great big country. Aren’t you? For many people, and some animals, that means a road trip. June is a great month for a road trip and I just learned that June 19th is national ‘take a road trip day’, so that is what I am going to do.

Road trips are not new. People have been traveling around the world forever. They used to walk. Then there were bicycles, horse drawn carts, carriages, and stagecoaches. People even crossed the United States, from the east coast to the west coast, in covered wagons. That road trip could take up to 6 months. Way too long for me. I only venture about 25 feet. If I can get in a car, I’ll be long gone.

If fact there were no roads way back when. Only walking trails made by people or herds of animals. They say that some roads in Boston were even made by cows. I wonder if that’s true. Sometimes people had to cut down trees to make a trail. It was pretty wild back then. There are still many trails around today, but most are paved. Some of the most notable are the Oregon Trail, the Overland Trail, Taos Mountain Trail, and the Goodnight-Loving Trail. The Goodnight-Loving trail is not as romantic as it sounds. It was a cattle trail in the 1860s for moving Texas Longhorn cattle from Texas to Colorado and into Wyoming.

The Overland Trail was for mail and then stagecoaches and ran from St. Louis, Missouri to Sacramento, California. That takes 31 hours by car and most of the trail is now a highway called Route 80. You can walk that trail too, but it takes 648 hours, which is about a month. That is a long time.

Most people these days take their road trips in cars. That is what I am going to do. I am going to hitch a ride in a car and see the sights, as long as I am not a sight.

I’ll post pictures from the road. I’m excited to head north and plan on capturing as many road signs and people as I can for good pictures.

As you prepare for you road trip, whether it’s local or to another state, remember you are carrying on a tradition that many people before you have done. I’ll post some pictures so you can see where I am. You can post pictures, too.

Well, I’m off to do some packing. See you on the road!