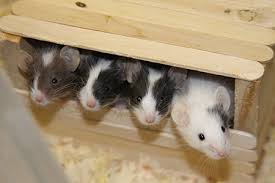 There are hundreds of types of mice that can be found around the world.

First there are deer mice. These little guys, about 2 to 4 inches long have a 2-5 inch tail, and they live in the woods. But they venture into homes and other buildings that are located in the woods. I had this type of mouse in my house which was in the woods.

Then the house mouse. These gray mice are about 3 inches long. They have small feet and head, and large eyes and ears, just like Martin the Mouse, who happens to be found in famous houses. This is the most common type of mouse you will find.

Then there is the white-footed mouse. This brownish-gray mouse is found mostly in the eastern United States and as far south as the Carolinas and west to Arizona. That is a large area to cover. They are bigger that the house mouse. Their feet and belly are white! They can be found near both forests and bushlands.

The African pygmy mouse is the smallest known mouse. It is about the size of a man’s thumb. That is a small mouse.

According to Animal Moms, “Mice make homes in different habitats, such as deciduous forests, open grasslands, farms, on the borders of streams, swamps and ponds, Rocky Mountains and city settings. Mice are commonly found living in terrestrial environments at most elevations. Some mice prefer habitats with moisture and humidity, such as those surrounding water sources, while others, like the pocket mouse, adapted to survive in arid desert environments. Mice territories commonly overlap, especially if there are numerous species of mice in one area.”

No matter where you live you will find mice. And what type of houses do they live in? “Some species, such as deer mice and house mice, build nests under rocks and stumps made of shredded plants and animal fur. Others live in shrubs, decks, wood piles, tree cavities and crevices of rock walls. Species like the meadow jumping mouse, pocket mouse and woodland jumping mouse take up home in abandoned burrows made by other mammals.” Says Animal Moms.

Mice live everywhere and in different environments. They live close to people too, and even in their houses.

While one or two mice can be nice as pets. But, mice that are running wild and having many mice running wild in your house can be a problem.